Drawn Together Wiki
Register
Don't have an account?
Sign In
in: Episodes, Captain Hero Episodes, Xandir Episodes,
and 4 more

Xandir and Tim, Sitting in a Tree

Edit
watch 01:36
We're Getting Mutants in the MCU - The Loop
Do you like this video?
Play Sound

"Xandir and Tim, Sitting in a Tree" is the eighteenth episode of Drawn Together.

Captain Hero announces that his "friend", Tim Tommerson, is coming for a visit and asks Xandir to look after him. Xandir is annoyed and initially refuses to help, but when Tim shows up, Xandir reluctantly plays along despite his very visible irritation. Tim appears to be just like Captain Hero, except that he wears glasses. Xandir is certain that Tim is actually Hero himself playing some kind of game with him. However, when Xandir realizes that Tim is much nicer than Captain Hero, and more sensitive and open-minded, a romance begins to blossom between the two. Xandir decides that Tim is actually Hero's homosexual side which Captain Hero is in denial about. Xandir tries to encourage Tim to be open about who he is, and to tell Hero about how he feels. Tim tries, but Captain Hero proceeds to get extremely violent when the topic is addressed. Finally, Tim tells Xandir that the only way to reconcile the situation is to shoot Captain Hero; this will symbolically kill off the Captain Hero the world knows, and allow the true person, Tim, to take over. Xandir walks into Hero's room, sees Hero standing in the shadows, and shoots him. Unfortunately, he does not realize until it is too late that it was actually Tim he shot. Hero/Tim then tells Xandir that since it was Tim that was killed, this must mean that Hero isn't gay after all. Xandir gets fed up with the whole charade and leaves, with Hero telling him to keep it between themselves (as he believes it will make people think he is insane).

Meanwhile, the other housemates watch the conclusion of a show featuring a flying British kangaroo, and they all agree it was terrible. If only, they sigh, there was some way to know ahead of time what TV shows are worth watching. The answer to their prayers then comes wafting down the chimney: an issue of Entertainment Weekly. They are as excited as kids in a candy store as they flip through the pages; that is, until they come across the magazine's review of Drawn Together. EW declares that the show is disgusting and offensive and just basically worthless, and gives it a letter grade of "F". Everyone is devastated except Spanky, who continues with his disgusting fart jokes, figuring that Entertainment Weekly just doesn't know what they're talking about. However, when he reads some of their other reviews and finds them to be fairly accurate, he comes to the horrible realization that EW is right. Spanky blames himself and his toilet humor for dragging the show down, and leaves the house. He goes back to his old life in the suburbs, which includes a wife and child, and gets a regular 9 to 5 job as a hostage crisis negotiator.

Spanky misses being on Drawn Together, however. Then one day at a hostage situation, someone pulls his finger, causing him to fart and making the cops laugh; the cops realize that Spanky was the pig from Drawn Together and tell him how great they think he is. Spanky realizes that despite what Entertainment Weekly said, a lot of people still love his toilet humor. Having been given new reason for being, he returns triumphantly to the Drawn Together house. Spanky convinces the housemates that the time has come for taking action, so the group pays a visit to the EW offices. While the rest of the group cause general chaos in the office, Spanky searches for the person who wrote the review. When he finds them, he immediately realizes why they gave the show such a bad review: the TV critic is a Jewish conservative pro-life born again overweight Asian (Indian) homophobic lesbian broad who cuts herself—in short, everything the show makes fun of every week. Spanky doesn't succeed in getting the critic to change her mind about the show, but he does realize that since she's not the kind of person they're making the show for, the bad review isn't so bad, and accepts that one person's opinion isn't necessarily indicative of the show's actual worth. The critic, wanting to be constructive, tells Spanky that one of Drawn Together's biggest problems is that they never know how to end the show. Spanky dismisses this notion, then hitches a ride to the rodeo with the flying kangaroo whom the housemates had mocked earlier in the episode. Back in the Drawn Together house, the housemates watch the ending of the program. Foxxy declares that it was really terrible, and Spanky farts in agreement.

Musical number: "Morning Train", which accompanies a montage of Spanky's new life in the suburbs. The song was originally sung by Sheena Easton, but here it is performed by the episode's guest star Jimmy Kimmel.

Notes and inside references[]

It can be viewed at the official Drawn Together website here. 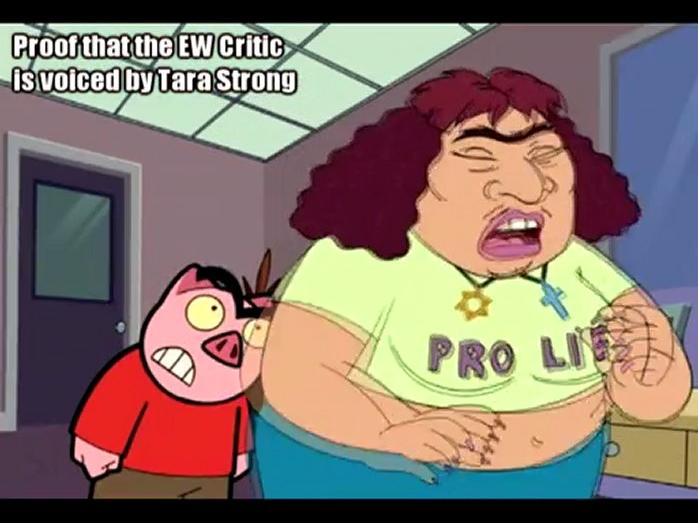 Proof that the EW Critic is voiced by Tara Strong

This video shows that the EW Critic is voiced by Tara Strong (as pitch shifted by contributor SomeDrawnTogetherAddict).

Community content is available under CC-BY-SA unless otherwise noted.