Drawn Together Wiki
Register
Don't have an account?
Sign In
Advertisement
in: Episodes, Wooldoor Episodes, Captain Hero Episodes,
and 2 more

"The Lemon-AIDS Walk" is the nineteenth episode of Drawn Together.

A friendly badminton competition against the former cast of Drawn Together reveals a shameful secret about Captain Hero: he is terrible at sports. He tries to drown his sorrows in lemonade at a lemonade stand that Clara and Wooldoor have set up, but no one wants to tolerate his drunken behavior. Foxxy comes by asking for someone to sponsor her in the upcoming AIDS walk, which gives Captain Hero an idea. Realizing that walking is something he's perfectly capable of, Hero tells Foxxy that he won't sponsor her; rather, he'll enter the AIDS walk himself and win it.

Foxxy tries to tell him that the AIDS walk is a charity event, not a competition, but Hero won't hear of it. He immediately begins training, only to run into another obstacle when he realizes he isn't even a champion walker; the elderly women at the mall can walk rings around him. He realizes he is in need of some outside help, which he finds at the mall's nutritional center when the employee there hooks him up with some steroids. The steroids make Hero's body big and powerful, but they also make him even more difficult for the other housemates to deal with than usual. After Foxxy finds out his secret, the housemates stage an intervention for him, which he responds to by killing everyone in a steroid-fueled rage. 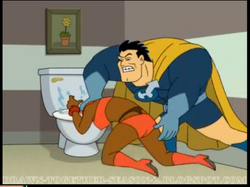 Deciding he doesn't belong in the Drawn Together house anymore, Captain Hero decides to go somewhere he can be accepted and understood, and ends up befriending and moving in with Popeye. He and Popeye have a great time training together until Popeye suddenly dies of AIDS one day. Popeye tells Hero that he contracted the disease by sharing contaminated steroid needles. With his last dying breath, Popeye asks Captain Hero to get clean, and hopefully prevent others from suffering the same fate. Hero does just this, showing up at the AIDS walk completely restored to his old self. Hero ends up "winning" the AIDS walk completely clean by killing or horribly injuring all the other walkers, resulting in no money being generated for charity. Hero ignores the crying spokeswoman and walks off with his "prizes", the basket holding names for a raffle, and an AIDS quilt.

Meanwhile, Wooldoor is having fun running the lemonade stand with his good friend Clara, at least until Spanky Ham, playing the bad boy, induces Wooldoor to leave the lemonade stand behind and go with him on his motorcycle to the mall. The pair go to the mall candy store together, but as the two are in line, Wooldoor suddenly realizes that he doesn't have the money to pay for the candy he's holding. Spanky urges Wooldoor to just steal the candy- after all, that's what a cool person would do. Wooldoor panics and runs out with the candy. After a showdown with the security guard, Wooldoor is caught and taken into custody in the mall security office. He is held there for a while and then let go, but once he gets out, he finds his whole world has changed, and he is unable to adjust to life on the outside again.

In an attempt to find some normality, he goes back to Clara at the lemonade stand, only to discover she couldn't wait for him, and has given his job away—to Spanky Ham, of all people. Wooldoor freaks out, and then finally decides that he cannot deal with life as a "free man". He must go back to the mall, repeat his crime, and be sent back to "prison" (actually, the Mall Security/Lost & Found Lounge).

He returns, and after going on a Looney Tunes-style crime spree, is caught again. Clara shows up to tell Wooldoor not to despair, that she'll wait for him this time, even if he's held in custody for 28 whole minutes. Wooldoor is let out for good behavior after 15 minutes, but when he tries to find Clara, he is told she left 10 minutes ago, which makes Wooldoor throw a fit.

Musical number: "Judge Fudge Theme Song", a 70's-style funk/soul song based on the "Theme from Shaft" by Isaac Hayes, plays over the opening credits of a fictitious TV show, The Judge Fudge Adventure Power Hour. Also, Sammy Hagar's "Winner Takes It All" plays during the AIDS walk in a parody of training montages and big competition scenes from numerous films. The song was originally featured in the Sylvester Stallone movie Over the Top.

Notes and inside references[]

It can be viewed at the official Drawn Together website here.

Community content is available under CC-BY-SA unless otherwise noted.
Advertisement